You are here
Home > Casino Strategies > Roulette with system 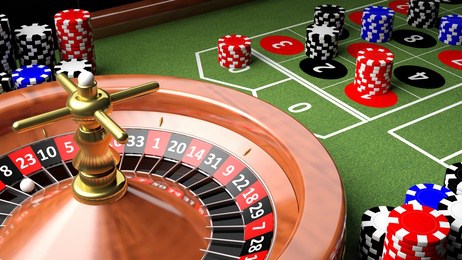 The chattering of the ball, which slowly rolls down the path on its course, before finally settling on a number and thus determines which field has now won, can no longer be admired in the casino, but also online. Roulette is a game that fascinates – and for this reason also has a great influx of players. But are there any profitable strategies that can help you achieve success?

For sure, beginners can not forget that in fact Roulette is a typical gamble. The player has de facto no direct influence on his profit and also not on the game, whereby there is also no bombproof profit system. Guarantees are therefore to be excluded – simply because the falling of the ball depends on the chance. Nevertheless, it makes sense for roulette players to deal with the well-known winning strategies. They can find their own weaknesses and perfect their game.

Because: The way a person plays, can also make the small but fine difference with roulette. Essentially, the probability that the ball will land on the decisive field at the roulette is always logical. If you are not a mathematics professor but still want to help your luck, we have listed the three most popular roulette systems with system strategies:

The Martingale Strategy: Here we can speak of a negative progression betting system, which is based on the simple basic principle of always doubling the bet after losses. As a result of the doubling, losses incurred by then are to be overcompensated in the event of a later gain. In the Klartext, that means: Whoever continues to play, will win anyway. The right small money is of course necessary. It is also important to always have the same easy chance. This means bets on 18 numbers, ie either red or black, straight or odd or on manque (1 to 18) or passe (19 to 36). After selecting the easy chance, the player remains at this until he wins. Prior to this, he doubles his stake with every loss.

The Paroli system: In its mode of operation this kind of game resembles the martingale strategy, but works differently. The Paroli system requires the player to use a raise after each bet: to bet and profit. If the player loses, the stake remains the same and is not increased. Whatever you play is not fixed here, but the simple chances are again. The advantage of the system is that it can be played in a capital-friendly way, since the player only increases by a profit. However, large jumps upwards are, of course, just as difficult.

The D’Alembert bill: the system named after the French mathematician Jean le Rond d’Alembert, aims to set a maximum stake before the start of the game that the player would also be willing to lose. The purpose of the game is to balance all losses with a single win.
The player does not rely on numbers, but on color or even and odd. Finally, the player sets a betting unit, increasing it by a further betting unit in case of loss, until he wins. In the case of a profit, the next bet is then reduced by one betting unit. It is a risky thing here that with each loss the bets grow and you lose all your money because the success is too long in the process – which is why the system is only for players with strong nerves.

We hope  “roulette with system”  gives all interested Player a good overview of some possible tactical approaches at the roulette table.